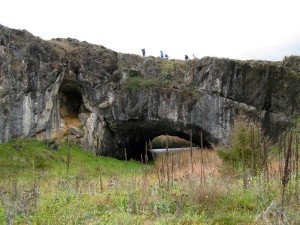 “London Bridge arch, about 18km from Queanbeyan (NSW) began to form when sediment and coral remains were deposited on an ocean floor 420 million years ago – it was then subject to intense pressure.

Over time the ocean receded and erosion shaped the landscape.

London Bridge is a natural limestone arch that was formed by water slowly leaching through the limestone, enlarging cracks until a passage was big enough for Burra Creek to pass through.

It reached its present size about 20,000 years ago” and housed Aboriginal burial remains prior to white intrusion.

Captain Mark Currie’s Aboriginal guide directed him to the arch in 1823  and local Europeans nick-named it London Bridge.1

The arch is now a heritage listed tourist attraction and is part of the Googong Dam catchment area.

A proposal by “Australian Capital Territory Electricity and Water” (ACTEW) to construct and operate an underground pipeline that can transfer up to 100 megaliters/ day of water from the Murrumbidgee River (within the ACT) to Burra Creek (in NSW)” where the water will then flow along Burra Creek through the London Bridge Arch to Googong Dam for storage will mimic the one metre height of floods (above the natural water line) under London Bridge and (so it is said) will not have any adverse effect on the natural limestone arch.2

Will this old English nursery rhyme that was (and perhaps still is) a popular school yard playground game in days of yore become the future catch cry for our own historic, heritage-listed natural, limestone arch London Bridge?

Community comment, so far, favours a pipeline water transfer from the Murrumbidgee River all the way to Googong Dam and not the cheaper alternative to discharge water into Burra Creek.

Given the rarity of floods and the regularity of droughts in this region there has always been erosion rest periods under the arch but under the draft proposal by ACTEW water will increase and Burra Creek water level will rise and the arch will face erosion by un-natural regular, water-pressure.

There are many other environmental concerns – so have your say.

1. (i) Brief information learnt during an excursion to “London Bridge” from a pamphlet “Googong Foreshores London Bridge Waling Track,” distributed by ACT Parks, Conservation and Lands – their website: <www.tams.act.gov.au>
(ii) The excursion to London Bridge was part of the Canberra & Region Heritage Festival 2010, and was led by National Trust member Robert Abell – his very informative and authoritative geological handout can be found at <Rsabell/londonbridge/nationaltrust/april2010>.
2. Too often experts justify “that nothing will happen” and too often it is too late to repair the damage when we (the community) find out they were wrong – connee.
3. Connee-Colleen © “Queanbeyan Outlook (229) “London Bridge”, The Queanbeyan Age, April, 30, 2010, p 13.