Let’s see it through 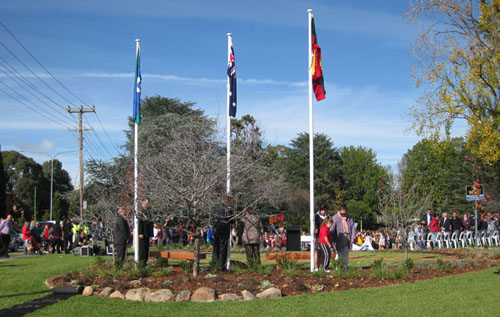 1 Indigenous Australians with their ancestry of over forty thousand years, and newer Australians who have relocated to Queanbeyan within the past two hundred and twenty-two years, started a Reconciliation Walk, in Queanbeyan, almost 20 years ago. 2

Since those early days when everyone walked over the Queanbeyan Bridge and walked up Monaro and Lowe Streets to Town Park for games during Naidoc Week; at some stage Council became involved and the walk went to Council Chambers in Crawford Street to unfurl our three flags: the Australian flag, the Aboriginal flag and the Queanbeyan City Council flag.3

This year was different, steady rain all weekend continued in the early hours of Tuesday morning, threatening the planned Reconciliation Walk and the planned opening of the new Reconciliation Garden in Town Park on June 1, 2010.4

So when the rain stopped and the sun shone in time to dry the wet, green grass and leave time to set up the barbi and sizzle some sausages, it added to this happy, memorable-moment in our town’s history.5

On the corner of Lowe and Campbell Streets, the new Reconciliation Garden, is a composition of natural elements of rock, earth, grass and a mixture of native-healing plants and exotic plants representing our Indigenous culture and the culture of our newcomers.6

All these element are within the Aboriginal symbolism of a meeting place; with three short curved paths meeting at a rock in the center, symbolizing that different people who follow different paths can still meet together. 7 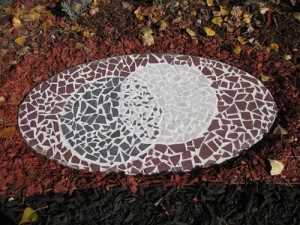 Two small, powerful, mosaic-artworks, set in oval-shapes (like eyes) display symbolic healing-motifs and add a touch of colour to create interest and curiosity and stimulate the mind, at the Reconciliation Garden.

One mosaic has a black circle and a white circle on a brown background, with one quarter of the two circles overlapping.

The inter-mixing of the black and white circles symbolizing reconciliation. 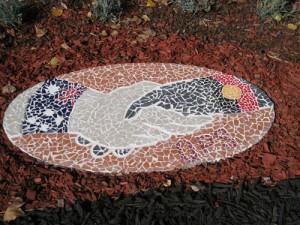 The second mosaic features a black and a white hand clasped in a hand-shake.

The black hand has a shirt-cuff motif of the Aboriginal flag.9

The white hand has a shirt-cuff motive of the Australian flag.10

Powerful messages of the importance that flags hold within our psychic.

Until Tuesday Queanbeyan’s three flags were only flown in two prominent and important locations:

“Each year National Reconciliation Week (NRW) celebrates the rich culture and history of the First Australians. It is the ideal time for everyone to join the reconciliation conversation and to think about how we can help turn around the disadvantage experienced by many Aboriginal and Torres Strait Islander people.”12

“NRW 2010 will highlight that a decade after the historic bridge walks it’s fair to say the future for reconciliation has never looked brighter.”14

“And while there’s still a way to go, respect, trust and the knowledge to turn good intentions into effective actions pave the way forward.”15

1. All photos in this post are © Connee-Colleen.
2. Comment: Wradjuri Elder Dawn Johnston was the Aboriginal Health Officer at Queanbeyan Hospital; in the early 1990s Dawn said she wanted to organize a walk and asked how to do it. Connee remembers bringing in a old “white-single-bed-sheet from her home, as a banner for the group to paint on and telling Dawn the information she needed and who to contact: how to close roads, notify the police and the newspapers etc; but it was left up to Dawn to work with the Aboriginal People, which she did.
3. The first early walks need to be researched; the newspapers were present and there were games in Town Park; specific dates would clarify exactly what and when events took place; the route of the walk and when they went to Council?
4. Connee-Colleen © “Queanbeyan Outlook (234), Reconciliation”, The Queanbeyan Age, June 4, 2010, p.13. Comment: The rain was needed as Australia is perpetually in drought, the rain was steady and soaking, the type of rain you need; not the rain that washes the top soil away; but it is still nice to have the sun shine on a special activity.
5. Council put on the BBQ and volunteers helped cooked the sausages. The Reconciliation chocolate mud cake was delicious.
6. (i) Mayor Tim Overall made this comment during his speech, that “two children from each school helped with the planting of the native plants, which had been used for healing by traditional Aboriginal people, and the exotic plants”; (ii) The Mayor also recognized the Ngunawal people and the Ngambri people, as (both) custodians of the land, as is required by Council’s Memorandum of Understanding.  (iii) Comment: Council’s Memorandum of Understanding was signed by Ngambri Elder Louise Brown (Elder Matilda House’s sister) representing the local Aboriginal people of this country and Wradjui Elder “Aunty” Ethel Baxter representing the broader and all encompasing Aboriginal people who have made Queanbeyan their home. (iv) Comment: The Mayor’s mention of the participation of our youth in the planting at the Reconciliation garden is an example of Queanbeyan’s motto: “Faith in the Future” because youth are our future.
7. The design shows that the three paths representing different cultures: Indigenous Aboriginals and “those people who have arrived since 1788″ can meet together; a committee which looks at Aboriginal issues in Queanbeyan was part of the process that made this symbolic garden so successful.
8. Connee’s interpretation is justified as that is what we are all invited to do when viewing art or symbolism. The individual names of the artists and the committee at this stage are not known – recognition was a group acknowledgement.
9. The Aboriginal flag was designed by an Aboriginal. The publicity and controversy when Aboriginal athlete (runner) Kathy Freeman wrapped the Aboriginal Flag around herself at the Olympics and ran around the track holding it high gave the flag the profile it needed. The Aboriginal Flag now holds a place of pride and is flown with the Australian and Queanbeyan City Council flags; All over Australia the Aboriginal flag is recognized. (A separate post will cover this topic).
10. Comment: Flags in Australia are still under scrutiny. Australia did not have its own official flag for about 150 years and used the Union Jack (Britian’s national flag). The Union Jack is now in the corner of the Australian flag but still causes controversy. (A separate post will cover this topic and look at some of the flags Australian’s call their own).
11. Comment: The flags mark the new Reconciliation Garden as a prominent and important location being on a major corner where they can be seen clearly.
12. (i) A National Press Release, for National Reconciliation Week (NRW) published in: “Queanbeyan City Council, For Your Information – National Reconciliation Week: 27 May – 3 June 2010″. The Chronicle, May 4, 2010. p.8.  (ii) The local and national media give the NRW a lot of well deserved publicity and coverage.
13. Ibid.
14. (i) NRW press release. (ii) Comment: The “Bridge Walk” refers to the Sydney Harbour Bridge Walk, on May 28, 2000 during Reconciliation Week when about 300,000 Australians, walked in solidarity with Aboriginal people across the bridge to gain recognition for a better deal for Aboriginal people and say “sorry” for past injustices; the day was captured in a trail of smoke from a plane high above the 300,000 walkers that spelt the word “sorry” in the sky (great photo by Jessica Hromason) this added momentum for the Apology issue to come out into the open.
15. Comment: (i) Former Australian Prime Minister John Howard refused to say “Sorry” during his long term in office; (ii) the issue stayed alive for another ten years and it was a newly elected Prime Minister Hon Kevin Rudd who used the Federal Parliament, as the venue to say an official “Sorry” in Parliament House on February 13, 2008: for the injustices that Aboriginal people have suffered. (This will be a separate post). (iii) Prior to saying “Sorry” on February 13, 2008, Prime Minister Rudd had on the previous day, February 12, 2008, held the first Aboriginal “Welcome to Country” at Parliament House (a real extravaganza) to open his first session of Parliament; Local Aboriginal, Nagambri Elder Matilda House was part of that grand “Welcome to Country” (there was Aboriginal dancing etc from other groups) and Elder House gave the Prime Minister Kevin Rudd a “Aboriginal Message Stick”.

Copyright
All content on Before Canberra Copyright © Connee-Colleen unless otherwise noted – apologies extended if inadvertently a copyright has not been acknowledged – please inform so this can be rectified.