A tail of success 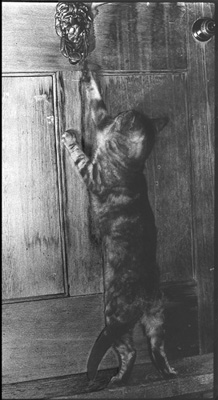 It was winter in a country town that pretended to be a city.2

The wind whistled and the lightning flashed and the rain beat down on the corrugated roof.

Occasionally a wisp of wind came down the chimney and stirred the blackened wood in the fireplace – until finally there was a last sparkle of red and then nothing – only blackness.

The wind nudged the mother and she tossed restlessly in her sleep – the mother was struggling to survive in a world that at times could be very threatening.

The wind knew that this was such a time. The wind saw and knew everything.

The wind came in through the cracks of the old timber cottage and moved gently through the rooms making sure that all was well.

The wind nudged the boy but the boy did not stir. The boy slept soundly – he was the man of the house – and thus began a winter’s tale.

Suddenly, she was awake. The mother could hear the old veranda boards creaking. She lay still and found it hard to breathe. She was afraid to move in case someone outside heard the bed creaking.

Perhaps someone could hear her heart beating? Why did her heart have to beat so loudly?

The mother could not move she was frozen in her bed. The wind knew the mother was feeling colder inside than it was cold outside.

After what seemed like a million years the creaking stopped as suddenly as it had begun. The mother knew the boy would not have heard anything – nothing wakened the boy.

Soon her heart quietened. Perhaps she was still dreaming? Perhaps it was all part of her dream? She rolled over closed her eyes and tried to restart her dream.

There was no more creaking and she started to doze off until the knocking started. Again the mother lay still as her heart kept beat in time with the deliberate knock. She held her breath during the silence when the brass knocker was raised until the brass knocker fell with a thud, then her heart went thud too.

After awhile the mother mustered the courage to creep up the hall and looked under the door. She could see a shadow on the doorstep and knew that there really was someone out there. But who?

She sat on the floor and drew her knees under her chin and with her arms encasing them she rocked back and forth. It was small comfort.

The mother knew it was not a dream when a pattern established itself. It was always at night. Always when it was cold. Always when the wind blew.

It always started with the veranda creaking; the brass doorknocker falling slowly with a thud; and then silence as she moved close to the door.

Night after night she sat alone in the hall shivering as she listened to the slow thud of the doorknocker meticulously picked up at definite intervals and deliberately and slowly dropped.

That night the wind saw the boy toss and turn restlessly in his sleep and when the mother heard the creak on the veranda and the thud of the brass door-knocker as it fell, she woke the boy.

The days turned into weeks and the mother and the boy grew bolder issuing challenges from behind the door.

There was always silence. There was never an answer no matter how often they called, no matter how long they waited. Only the silence of a silent reply.

One night the boy stayed by the door whilst the mother went into an adjoining room and looked out the window. The boy said the shadow had not moved. The mother said there was no movement on the veranda and no person could be seen.

Could it be a ghost? A real ghost they wondered?

The mystery had to be solved so one night when the moon was hidden behind clouds they crept out the back door and hid behind the old gum tree to wait and watch and to listen in the gloom.

Eventually, as they were dozing off, the noise from the thud of the brass doorknocker surrounded them. And again and again they heard the doorknocker dropping – thud.

During a whispered discussion the knocking ceased.

Although their eyes had difficulty penetrating the darkness they were sure there had been no movement near the door. They had reached the conclusion that there was no human being present except themselves when again the sudden thud of the doorknocker was heard; and they were afraid; and they held each other close. Perhaps it really was a ghost?

More thuds from the brass doorknocker and they hoped it was the wind that made them shiver. Then the moonlight started to flicker through a slight openings in the dark clouds and sometimes they felt they could see the slightest of movement.

They looked harder and harder trying to penetrate the darkness until in an instant, together, they finally recognized the small figure pressed against the door stretching and stretching until she was just within reach of the brass doorknocker. Then after a moments hesitation as she regained her balance and pressed tighter against the door to steady herself and prepared for the extra extension and  power she would need to lift the brass door knocker and then let it go. Thud!

After each “thud” she remained pressed against the door as if energy and time would be wasted in getting down and starting the process over again – she just kept repeating the process.

Quickly the mother grabbed the camera and pressed the button. In the flash Wossa3 was caught in the act and the laughing boy ran and scooped her up into his arms and cuddled her before he opened the door and carried her inside – now they had the proof they needed.

The mother and the boy realized that Wossa must have watched them coming and going in and out of the front door, perhaps for several years, before reaching the conclusion that the way to get inside the house, where it was warm and near the food supply, was by knocking.

Wossa was right because from that time forward the mother and the boy always opened the door whenever Wossa knocked no matter what time of the day or night.

And as Wossa curled up in her favorite chair by the fire she purred, “The mother and boy were slow to learn, but it is so convenient to have trained pets to let you in on request”.

1. “Picture and story of Wossa” © Connee-Colleen & Nemo 1982. (The Canon black & white camera was set up on the veranda on a tripod with an air trigger extension attached so the ‘intruder’ could be viewed through the bedroom window and the black and white photo taken from inside the house. Connee and Nemo developed and printed the photo in their artist studio).
2. Connee-Colleen & Nemo © “Queanbeyan Outlook (6): Reach for success,” The Queanbeyan Age, March 15. 2005, p. 5.
3. The cat’s real name was ‘Wossa’, in the “Queanbeyan Outlook” version the cat was named Marilyn.
4. A true story with a real mother and a real son; who lived in Queanbeyan in an old timber house where the wind whistled in through the cracks;  who owned a real cat called Wossa, an adult stray who had adopted them. Wossa taught herself to knock on the front door, which terrified the mother and the son for a long, long time, until they found the courage to discovered the truth.

Copyright
All content on Before Canberra Copyright © Connee-Colleen unless otherwise noted – apologies extended if inadvertently a copyright has not been acknowledged – please inform so this can be rectified.